When Johann Buquoy, on the initiative of his wife Terezie, born Countess Paar, decided to set up a large landscape park in the valley of the river Stropnice near Nové Hrady, he did not just do it for pleasure, but also to provide his subjects with a job and livelihood. In 1770, alleyways, groups of exotic trees, a flower parterre and other flowerbeds, aviaries and doves, as well as an artificial ruin dominating the whole area, were already in the Valloncheri or Beautiful Valley. Over the next decades, the appearance of the park has changed considerably due to purely practical and aesthetic reasons. In August 1794 a great flood ravaged the flower beds several times, and also a large meadow replaced the cultivated parterre. The Countess Terezie built a spa building in the park in 1788, which she named in memory of her father (Duke Jan Václav Paar) of Wenceslas Baths (nowadays Penzion Lázničky), which was part of a smaller courtyard that formed the original economic background of the nearby Blue House mansion (originally Neugebäude) – a mansion built in the womb-based landscape park. The Blue House name came later, referring to its blue-painted roof. The Countess Terezie sold the Beautiful Valley to her nephew George in 1817 (Georg Franz August), who renamed her favorite place on Theresa’s Valley after the death of her aunt (1818). Apparently, at the initiative of the young Earl, an artificial 13 m high waterfall was built in the park of the same year, fed by the Stropnice River, which was supposed to resemble the Alpine scenery, and a number of large stones were brought into the river below the waterfall. In 1949 the park was declared a state nature reserve. Since 1992 it has been part of the national natural monument Terčino údolí, with an area of ​​139 ha. The Terčino Valley Nature Trail leads through the park – a 7 km long circuit with 12 information panels. It is an easy walk through beautiful nature, at any time of the year.

The National Nature Reserve protects one of the most valuable lowland peat bogs in our country. It is located in the southern part of the PLA Třeboňsko, north of the town of Nové Hrady. The passage through the protected area has a well maintained trail that has a hard surface. The sightseeing tour is 5 kilometers long. Peat has been mined in this area since 1774, mainly for the glassworks in Jiřík Valley, which is famous for its production of hard, opaque, and almost unbreakable glass – hyalite. Peat mining was terminated in the 20th century. In 1953, the peatland area was declared a reserve used mainly to protect the natural landscape cover. The reserve area is 403 ha.

The Žofín Forest is a highly protected area that is protected by the National Nature Reserve. It lies in the central part of the Novohradské Mountains. Žofín Forest together with the nearby forest Hojná Voda are the oldest reservations in Central Europe. Forest protection was declared the owner of the Nové Hrady estate, Count Jiří František Agust Buquoy, a decree of 28 August 1838. On most of the area there is a continuous natural development of the forest from the turn of the 18th and 19th centuries until today without forestry interventions. Beech prevails in the tree floor, spruce and fir are mixed, rarely sycamore and rough elm. The oldest wood species are massive surviving firs and spruces, 300 – 400 years old and 40 – 50 m tall, which mostly overlap the prevailing beech stand. 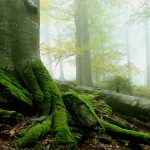 The village of Hojná Voda has long been a popular spa resort. In 1564, a healing spring was discovered here, whose miraculous effects were initially evidenced by the legend of a lumberjack who healed his leg injuries just by washing his wound with water from a local well. A small hamlet near the healing spring was first called the Wilhelm Mountain. Today’s name Hojná Voda is derived from the word healing, healing water. Cycling routes and hiking trails lead to the village of Vysoká and Kraví hora, 3 km from the village of Hojná Voda at the SE at the foot of the Vysoká mountain (1034 m) at the border with Austria is Hojnovodský prales – the second oldest reservation in Bohemia (September 1838), by Jiří František August Buquoy). The purpose of the protection was to preserve the rest of the original primeval forest from the intensive mining that took place in the Novohradské Mountains. Hojná Voda National Natural Monument is a natural beech forest and is also listed as a rare UNESCO World Heritage Site. At present, the Hojnovodský forest is open to the public, unlike the Žofínský. It offers a three-kilometer nature trail that will introduce you to the fauna and flora of the forest, its history and human influence. 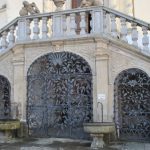 For its slightly radioactive water and its location with the cleanest air in the Czech Republic, Dobrá Voda (good water) was sought after as a spa resort. On the site of the healing spring, the Church of Our Lady of the Cross was built, instead of a small chapel, which was no longer sufficient for pilgrims. The foundation stone of the church was laid in 1706 and the entire building was completed.

Kraví Hora was formerly known as Kamenná Hora (Stone Mountain) and it got its present name from the cattle rich meadows, which are once again overgrown today. The Kraví Hora hill (Cow Mountain) is visible from a great distance away and is one of the unmistakable landmarks of the Novohradské Mountains. It’s peak is 953 meters and from there you can find rock walls, a number of isolated rocks, and the famous bizarre formation “Napoleon’s Head”. Not far from the top is a former military watchtower, which since 2001 has served as a telecommunication mast and as an observation tower. From here there are great views of the Novohradsko region: the Třeboň Basin, Šumava, Kleť, and the Slepičí Mountain with the hill Kohout and the Bohemian-Moravian Highlands. The total height of the audio unit is 37 meters. The tower is freely accessible throughout the year.

Mandelstein is the last significant peak in the north of the Novohradské mountains. Located in the Waldviertel region in Lower Austria, 7 km south of Nové Hrady, on the way to the historically significant Weitra, the forested viewpoint of Mandelstein rises 874 metres above sea level.

The top of the mountain is formed by a massive granite rock, on which there are rock bowls. At the foot of the rock there is a protected natural creation: the Mandlsteintor rock gate. Not far from the summit is a memorial with a chapel commemorating the post-war expulsion of Sudeten Germans from the Czech border in 1945, and which becomes a meeting place for German displaced persons from Czechoslovakia. A new metal observation platform with a telescope was built at the top in spring 2013.